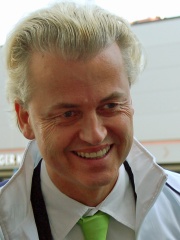 Geert Wilders (Dutch: [ˈɣeːrt ˈʋɪldərs]; born 6 September 1963) is a Dutch politician who has led the Party for Freedom (Partij voor de Vrijheid – PVV) since he founded it in 2006. He is also the party's leader in the House of Representatives (Tweede Kamer), having held a parliamentary seat since 1998. In the 2010 formation of the First Rutte cabinet, a minority government of the People's Party for Freedom and Democracy (VVD)—which he left in 2004—and Christian Democratic Appeal (CDA), Wilders actively participated in the negotiations, resulting in a "tolerance agreement" (gedoogakkoord) between the PVV and these parties. Read more on Wikipedia

Among politicians, Geert Wilders ranks 6,933 out of 15,577. Before him are Beorhtric of Wessex, Princess Helena of Nassau, Adaloald, Princess Sophie Antoinette of Brunswick-Wolfenbüttel, Macrianus Minor, and Takahashi Korekiyo. After him are Haider al-Abadi, Emperor Suzaku, John of Foix, Viscount of Narbonne, Penda of Mercia, Archduke Maximilian of Austria-Este, and Hrvoje Vukčić Hrvatinić.