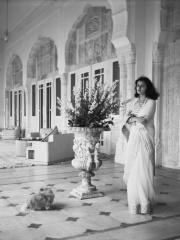 Maharani Gayatri Devi (born as Princess Gayatri Devi of Cooch Behar; 23 May 1919 − 29 July 2009), was the third Maharani consort of Jaipur from 1940 to 1949, through her marriage to Maharaja Sawai Man Singh II. Following her husband's signature for the Jaipur State to become part of the Union of India and her step-son's assumption of the title in 1970, she was known as Maharani Gayatri Devi, Rajmata of Jaipur. Ethnically born in a Koch Rajbongshi Hindu family, her father was Maharaja Jitendra Narayan of Cooch Behar in West Bengal, and her mother was Maratha Princess Indira Raje of Baroda, the only daughter of Maharaja Sayajirao Gaekwad III. Following India's independence and the abolition of the princely states, she became a successful politician in the Swatantra Party. Gayatri Devi was also celebrated for her classical beauty and became something of a fashion icon in her adulthood. Read more on Wikipedia

Since 2007, the English Wikipedia page of Gayatri Devi has received more than 1,466,789 page views. Her biography is available in 16 different languages on Wikipedia making her the 12,372nd most popular politician.