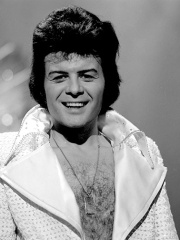 Paul Francis Gadd (born 8 May 1944), known professionally as Gary Glitter, is an English former glam rock singer who achieved success in the 1970s and 1980s. His career ended after he was imprisoned for downloading child pornography in 1999, and was subsequently convicted of child sexual abuse and attempted rape in 2006 and 2015. After performing under the name Paul Raven in the 1960s, he changed his stage name to Gary Glitter in the glam rock era of the early 1970s, with a sustained solo UK chart run of hits including "Rock and Roll, Parts 1 and 2", "Do You Wanna Touch Me", "I Love You Love Me Love", "I'm the Leader of the Gang (I Am)", and "Hello, Hello, I'm Back Again". Read more on Wikipedia