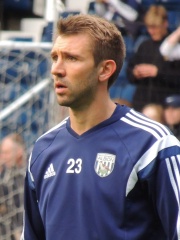 Gareth Gerald McAuley ( mə-KAW-lee; born 5 December 1979) is a Northern Irish former professional footballer who played as a centre back, most recently for Scottish Premiership club Rangers. He represented Northern Ireland at senior international level, being capped on 80 occasions between 2005 and 2019. McAuley began his career playing in Northern Irish football with Linfield, Ballyclare Comrades, Crusaders and Coleraine before joining English side Lincoln City in the summer of 2004. Read more on Wikipedia

Since 2007, the English Wikipedia page of Gareth McAuley has received more than 572,864 page views. His biography is available in 29 different languages on Wikipedia making him the 8,870th most popular soccer player.