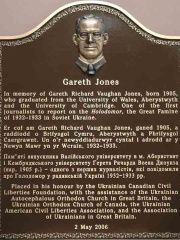 Gareth Richard Vaughan Jones (13 August 1905 – 12 August 1935) was a Welsh journalist who in March 1933 first reported in the Western world, without equivocation and under his own name, the existence of the Soviet famine of 1932–33, including the Holodomor.Jones had reported anonymously in The Times in 1931 on starvation in Soviet Ukraine and Southern Russia, and, after his third visit to the Soviet Union, issued a press release under his own name in Berlin on 29 March 1933 describing the widespread famine in detail. Reports by Malcolm Muggeridge, writing in 1933 as an anonymous correspondent, appeared contemporaneously in the Manchester Guardian; his first anonymous article specifying famine in the Soviet Union was published on 25 March 1933.After being banned from re-entering the Soviet Union, Jones was kidnapped and murdered in 1935 while investigating in Japanese-occupied Mongolia; his murder was likely by the Soviet secret police, the NKVD. Upon his death, former British prime minister David Lloyd George said, "He had a passion for finding out what was happening in foreign lands wherever there was trouble, and in pursuit of his investigations he shrank from no risk. ... Read more on Wikipedia

Among JOURNALISTS In United Kingdom