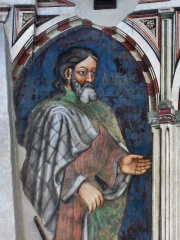 Gaius Fabricius Luscinus Monocularis ("the one-eyed"), son of Gaius, was said to have been the first of the Fabricii to move to ancient Rome, his family originating from Aletrium.In 284 BC he was one of the ambassadors to Tarentum, successfully keeping peace, and was elected consul in 282 BC where he saved the Greek city Thurii from the Lucanians. After the Romans were defeated by Pyrrhus at Heraclea, Fabricius negotiated peace terms with Pyrrhus and perhaps the ransom and exchange of prisoners; Plutarch reports that Pyrrhus was impressed by his inability to bribe Fabricius, and released the prisoners even without a ransom. Fabricius was consul a second time in 278 BC, and once again successful against the Samnites, Lucanians and Bruttians. Read more on Wikipedia

Among people born in 250 BC, Gaius Fabricius Luscinus ranks 12. Before him are Fusu, Lykourgos, Tiberius Sempronius Longus, Chen Sheng, Nicander, and Ariobarzanes of Pontus. After him are Zeno of Tarsus, An Dương Vương, Cleombrotus II, Appius Claudius Pulcher, Sauromaces I of Iberia, and Archidamus V.