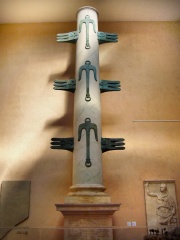 Gaius Duilius (lived during the 3rd century BC) was a Roman politician and admiral involved in the First Punic War.Not much is known about his family background or early career, since he was a novus homo, meaning not belonging to a traditional family of Roman aristocrats. He managed, nevertheless, to be elected consul for the year of 260 BC, at the outbreak of the First Punic war. As junior partner of the patrician Gnaeus Cornelius Scipio Asina, Duilius was given the command of the rear fleet, not expected to see much action. Read more on Wikipedia

Among politicians, Gaius Duilius ranks 5,349 out of 15,710. Before him are Baydu, Emperor Guangzong of Song, Claude Françoise de Lorraine, Archduke Felix of Austria, Emperor Konoe, and Violet Jessop. After him are Hwang Jang-yop, Infante Carlos, Duke of Calabria, Margaret I, Countess of Burgundy, Emperor Shengzong of Liao, Emperor Kōnin, and Thongloun Sisoulith.

Among people born in 300 BC, Gaius Duilius ranks 15. Before him are Hasdrubal Gisco, Prusias I of Bithynia, Gentius, Hanno the Great, Nicomedes I of Bithynia, and Berenice. After him are Hannibal Gisco, Pharnaces I of Pontus, Gaius Claudius Nero, Arsaces II of Parthia, Appius Claudius Caudex, and Wiman of Gojoseon. Among people deceased in 300 BC, Gaius Duilius ranks 10. Before him are Berossus, Nearchus, Hipparchia of Maroneia, Eudemus of Rhodes, Menaechmus, and Hegesias of Cyrene. After him are Eurydice of Egypt, Callippus, Appius Claudius Caudex, Mithridates II of Pontus, Xanthippus of Carthage, and Quintus Fabius Maximus Rullianus.