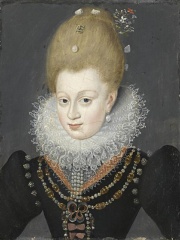 Gabrielle d'Estrées, Duchess of Beaufort and Verneuil, Marchioness of Monceaux (French: [ɡabʁijɛl dɛstʁe]; 1573 – 10 April 1599) was a mistress, confidante and adviser of Henry IV of France. She persuaded Henry to renounce Protestantism in favour of Catholicism in 1593. Later she urged French Catholics to accept the Edict of Nantes, which granted certain rights to the Protestants. Read more on Wikipedia

Since 2007, the English Wikipedia page of Gabrielle d'Estrées has received more than 204,048 page views. Her biography is available in 23 different languages on Wikipedia making her the 69th most popular social activist.

Among people born in 1573, Gabrielle d'Estrées ranks 5. Before her are William Laud, Maximilian I, Elector of Bavaria, Simon Marius, and Anne of Austria, Queen of Poland. After her are Christina of Holstein-Gottorp, Inigo Jones, Robert Catesby, Ukita Hideie, Sebastiaen Vrancx, Alexander, Duke of Schleswig-Holstein-Sonderburg, and Ernest Casimir I, Count of Nassau-Dietz. Among people deceased in 1599, Gabrielle d'Estrées ranks 2. Before her is Beatrice Cenci. After her are Edmund Spenser, Luca Marenzio, Maeda Toshiie, Chōsokabe Motochika, Cornelis de Houtman, Menocchio, and Francisco Guerrero.

Among SOCIAL ACTIVISTS In France