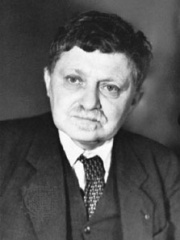 Gabriel Honoré Marcel (7 December 1889 – 8 October 1973) was a French philosopher, playwright, music critic and leading Christian existentialist. The author of over a dozen books and at least thirty plays, Marcel's work focused on the modern individual's struggle in a technologically dehumanizing society. Though often regarded as the first French existentialist, he dissociated himself from figures such as Jean-Paul Sartre, preferring the term philosophy of existence or neo-Socrateanism to define his own thought. Read more on Wikipedia

Gabriel Marcel was a philosopher, theologian, and dramatist. He is most famous for his philosophy of "Existentialism," which is the idea that people are free to make their own choices and are responsible for the consequences of those choices.

Among philosophers, Gabriel Marcel ranks 212 out of 1,089. Before him are Georgi Plekhanov, Bayazid Bastami, Benedetto Croce, Pelagius, Muhammad Abduh, and Melissus of Samos. After him are Miguel de Unamuno, Swami Vivekananda, Paulo Freire, Bernard Bolzano, Hasan al-Basri, and Hippias.