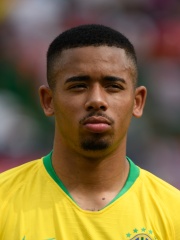 Gabriel Fernando de Jesus (born 3 April 1997), commonly known as Gabriel Jesus (Brazilian Portuguese: [ɡabɾiˈɛw ʒeˈzus]), is a Brazilian professional footballer who plays as a forward for club Manchester City and the Brazil national team.Jesus began his career at Palmeiras. He was voted the best newcomer of the 2015 Campeonato Brasileiro Série A, a year in which he also helped his team win the Copa do Brasil. The following year he was named the player of the season as Palmeiras won their first national league title in 22 years. Read more on Wikipedia

Since 2007, the English Wikipedia page of Gabriel Jesus has received more than 4,387,061 page views. His biography is available in 46 different languages on Wikipedia making him the 2,099th most popular soccer player.