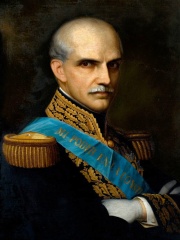 Gabriel Gregorio Fernando José María García Moreno y Morán de Butrón (December 24, 1821 – August 6, 1875) was an Ecuadorian politician who twice served as President of Ecuador (1861–65 and 1869–75) and was assassinated during his second term, after being elected to a third. He is noted for his conservatism, Catholic religious perspective and rivalry with liberal strongman Eloy Alfaro. Under his administration, Ecuador became a leader in science and higher education within Latin America. Read more on Wikipedia

Since 2007, the English Wikipedia page of Gabriel García Moreno has received more than 98,948 page views. His biography is available in 21 different languages on Wikipedia making him the 7,457th most popular politician.