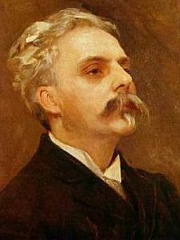 Gabriel Urbain Fauré (French: [ɡabʁiɛl yʁbɛ̃ fɔʁe]; 12 May 1845 – 4 November 1924) was a French composer, organist, pianist and teacher. He was one of the foremost French composers of his generation, and his musical style influenced many 20th-century composers. Among his best-known works are his Pavane, Requiem, Sicilienne, nocturnes for piano and the songs "Après un rêve" and "Clair de lune". Read more on Wikipedia

Since 2007, the English Wikipedia page of Gabriel Fauré has received more than 913,878 page views. His biography is available in 56 different languages on Wikipedia making him the 72nd most popular composer.

Among people born in 1845, Gabriel Fauré ranks 5. Before him are Alexander III of Russia, Ludwig II of Bavaria, Georg Cantor, and Wilhelm Röntgen. After him are George I of Greece, Gabriel Lippmann, Élie Metchnikoff, Charles Louis Alphonse Laveran, Amadeo I of Spain, Ludwig III of Bavaria, and Carl Spitteler. Among people deceased in 1924, Gabriel Fauré ranks 8. Before him are Franz Kafka, Giacomo Puccini, Anatole France, Woodrow Wilson, Joseph Conrad, and Louis Sullivan. After him are Alfred Marshall, Archduchess Marie Valerie of Austria, Carl Spitteler, Frances Hodgson Burnett, Ferruccio Busoni, and Marie-Adélaïde, Grand Duchess of Luxembourg.

Among COMPOSERS In France