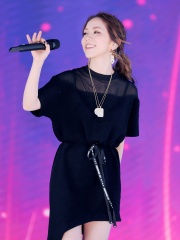 Gloria Tang Tsz-kei (born Tang Sze-wing; 16 August 1991), professionally known by her stage name G.E.M. (backronym of Get Everybody Moving) or , pinyin Dèng Zǐqí, is a Hong Kong singer-songwriter originally from Shanghai, China. She is known for her wide vocal range and songwriting. Her self-titled EP G.E.M. made her debut in the Hong Kong music scene with the release in 2008. Read more on Wikipedia

Since 2007, the English Wikipedia page of G.E.M. has received more than 621,229 page views. Her biography is available in 15 different languages on Wikipedia making her the 7,008th most popular actor.

Page views of G.E.M.s by language

Among actors, G.E.M. ranks 6,959 out of 8,832. Before her are Raven-Symoné, Michael Michele, Hayley Kiyoko, Matt Walsh, Kathryn Newton, and Jill Eikenberry. After her are Googie Withers, Felipe Colombo, Geoffrey Blake, Helly Luv, Uee, and Sarah Jones.