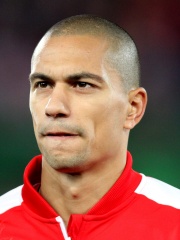 Gökhan İnler (born 27 June 1984) is a Swiss professional footballer who plays as a central midfielder for Turkish club Adana Demirspor. İnler began his professional career with FC Basel and later joined FC Aarau and FC Zürich, winning the Swiss Super League in both of his seasons with the latter. Read more on Wikipedia

Since 2007, the English Wikipedia page of Gökhan Inler has received more than 736,178 page views. His biography is available in 38 different languages on Wikipedia making him the 2,773rd most popular soccer player.

Among soccer players, Gökhan Inler ranks 2,769 out of 13,233. Before him are Igor Lediakhov, Kiril Metkov, Humberto Elgueta, Shigeharu Ueki, Anatoly Krutikov, and David Bisconti. After him are Rüdiger Abramczik, Pavel Sadyrin, François Omam-Biyik, Marcel Schmelzer, Ever Palacios, and Jesús Glaría.