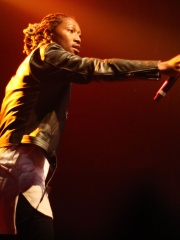 Nayvadius DeMun Wilburn (born November 20, 1983), better known by the stage name Future, is an American rapper, singer, songwriter, and record producer. Known for his mumble-styles vocals and prolific output, Future is considered a pioneer of the use of melody and vocal effects in modern trap music. Due to the sustained contemporary popularity of his musical style, Future is regarded as one of the most influential rappers of his generation.Born and raised in Atlanta, Georgia, Future signed a recording contract with A1 Recordings and Epic Records in 2011, and released the albums Pluto (2012) and Honest (2014), which contained the platinum singles "Turn On the Lights", "Honest", "Move That Dope", and "I Won". Read more on Wikipedia

Page views of Futures by language

Among singers, Future ranks 2,067 out of 3,541. Before him are Adelaide Hall, Salvatore Licitra, Tiffany Young, Dahyun, Lee Ryan, and Tomas N'evergreen. After him are Sa Dingding, Emin Agalarov, Tiffany Darwish, Vince Gill, Kurtis Blow, and Birdman.