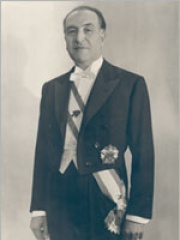 Emir Fuad Abdullah Chehab (Arabic: الأمير فؤاد عبد الله شهاب‎; also transliterated Fouad Shihab; 19 March 1902 – 25 April 1973) was the President of the Lebanese Republic from 1958 to 1964 and was Acting President in 1952. He served as Acting Prime Minister of Lebanon in 1952. Chehab's mandate was one of the most distinguished in Lebanon's history, due to the important reforms and large scale social development projects that he introduced and initiated, bringing harmony and prosperity to the country, and a mission to build the institutions of the modern state. Read more on Wikipedia

Since 2007, the English Wikipedia page of Fuad Chehab has received more than 101,634 page views. His biography is available in 21 different languages on Wikipedia making him the 8,883rd most popular politician.

Among politicians, Fuad Chehab ranks 8,837 out of 14,801. Before him are Wang Yi, András Hegedüs, Andrey II of Vladimir, Ordulf, Duke of Saxony, John the Cappadocian, and Phoenix. After him are Indravarman I, Nikolay Raevsky, Kazys Grinius, José María Velasco Ibarra, Mitso Asen of Bulgaria, and Joseph Lancaster.