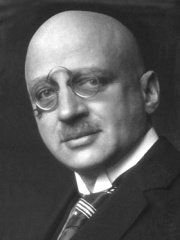 Fritz Haber (German pronunciation: [ˈfʁɪt͡s ˈhaːbɐ] (listen); 9 December 1868 – 29 January 1934) was a German chemist who received the Nobel Prize in Chemistry in 1918 for his invention of the Haber–Bosch process, a method used in industry to synthesize ammonia from nitrogen gas and hydrogen gas. This invention is important for the large-scale synthesis of fertilisers and explosives. It is estimated that one-third of annual global food production uses ammonia from the Haber–Bosch process, and that this supports nearly half the world population. Read more on Wikipedia

Fritz Haber is most famous for inventing a process to synthesize ammonia from nitrogen and hydrogen. This process was important because it allowed the production of fertilizer for food production.

Among people born in 1868, Fritz Haber ranks 3. Before him are Nicholas II of Russia and Maxim Gorky. After him are Karl Landsteiner, Miklós Horthy, Abdulmejid II, Constantine I of Greece, Robert Andrews Millikan, Archduchess Marie Valerie of Austria, Sophie, Duchess of Hohenberg, Gichin Funakoshi, and Emanuel Lasker. Among people deceased in 1934, Fritz Haber ranks 4. Before him are Marie Curie, Paul von Hindenburg, and Lev Vygotsky. After him are Ernst Röhm, Edward Elgar, Albert I of Belgium, Kurt von Schleicher, John Dillinger, Sergey Kirov, Raymond Poincaré, and Nestor Makhno.

Among CHEMISTS In Poland