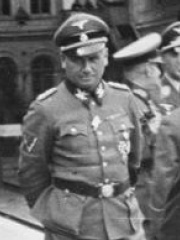 Friedrich Jeckeln (2 February 1895 – 3 February 1946) was a German SS commander during the Nazi era. He served as a Higher SS and Police Leader in the occupied Soviet Union during World War II. Jeckeln was the commander of one of the largest collection of Einsatzgruppen death squads and was personally responsible for ordering and organizing the deaths of over 100,000 Jews, Romani, and others designated by the Nazis as "undesirables". After the end of World War II in Europe, Jeckeln was convicted of war crimes by a Soviet military tribunal in Riga and executed in 1946. Read more on Wikipedia

Since 2007, the English Wikipedia page of Friedrich Jeckeln has received more than 359,865 page views. His biography is available in 20 different languages on Wikipedia making him the 66th most popular extremist.

Among EXTREMISTS In Germany