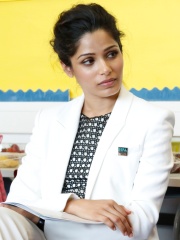 Freida Selena Pinto (born 18 October 1984) is an Indian actress who has appeared mainly in American and British films. Pinto rose to prominence with her film debut in the Indian drama Slumdog Millionaire (2008), which is a loose adaptation of the novel Q & A (2005) by Indian author Vikas Swarup. She was nominated for the BAFTA Award for Best Actress in a Supporting Role, the MTV Movie Award for Best Breakthrough Performance, and the Teen Choice Award for Choice Movie Actress – Drama, and won the Palm Springs International Film Festival Award for Breakthrough Performance for Slumdog Millionaire. Read more on Wikipedia

Since 2007, the English Wikipedia page of Freida Pinto has received more than 5,948,390 page views. Her biography is available in 53 different languages on Wikipedia making her the 3,626th most popular actor.