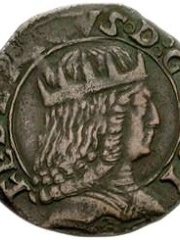 Frederick (April 19, 1452 – November 9, 1504), sometimes called Frederick IV or Frederick of Aragon, was the last King of Naples from the Neapolitan branch of the House of Trastámara, ruling from 1496 to 1501. He was the second son of Ferdinand I, younger brother of Alfonso II, and uncle of Ferdinand II, his predecessor. A combination of King Louis XII of France and Frederick's famous cousin King Ferdinand II of Aragon had continued the claim of Louis's predecessor, King Charles VIII of France, to Naples and Sicily. Read more on Wikipedia

Frederick of Naples was most famous for being the king of Naples and Sicily. He was also a patron of the arts.

Page views of Frederick of Naples by language

Among politicians, Frederick of Naples ranks 4,277 out of 15,710. Before him are Terauchi Masatake, Tokugawa Yoshimune, Andrej Hlinka, Deokjong of Goryeo, Charles of Valois, Duke of Berry, and Prince Amedeo, Duke of Aosta. After him are Bernhard Rust, Al-Muhtadi, Eric XII of Sweden, James FitzJames, 1st Duke of Berwick, Al-Ashraf Qansuh al-Ghuri, and Infanta Maria Antonia of Portugal.

Among people born in 1451, Frederick of Naples ranks 6. Before him are Christopher Columbus, Isabella I of Castile, Muhammad Shaybani, James III of Scotland, and René II, Duke of Lorraine. After him are Isabel Neville, Duchess of Clarence, Kemal Reis, Nicolás de Ovando, and Franchinus Gaffurius. Among people deceased in 1504, Frederick of Naples ranks 6. Before him are Isabella I of Castile, Stephen III of Moldavia, Filippino Lippi, Philibert II, Duke of Savoy, and John Corvinus. After him are Alvise Vivarini and Garci Rodríguez de Montalvo.