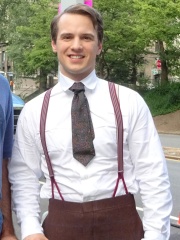 Frederic Wilhelm C.J. Sjöström (born 8 January 1987), known professionally as Freddie Stroma, is a British actor and model, best known for playing Cormac McLaggen in the Harry Potter film series and Luke in the 2011 musical comedy film A Cinderella Story: Once Upon a Song. He starred as Adam Cromwell on the dramedy series Unreal, which premiered on Lifetime in June 2015. He starred as Brit Vayner in the 2016 Michael Bay war film, 13 Hours: The Secret Soldiers of Benghazi. In 2016, he played H.G. Read more on Wikipedia

Since 2007, the English Wikipedia page of Freddie Stroma has received more than 2,065,524 page views. His biography is available in 21 different languages on Wikipedia making him the 7,546th most popular actor.