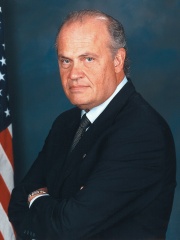 Freddie Dalton Thompson (August 19, 1942 – November 1, 2015) was an American politician, attorney, lobbyist, columnist, actor and radio personality. A member of the Republican Party, he served as a United States Senator from Tennessee from 1994 to 2003; Thompson was a candidate in the 2008 presidential primaries. He also chaired the International Security Advisory Board at the U.S. Department of State, was a member of the U.S.–China Economic and Security Review Commission, a member of the Council on Foreign Relations, as well as a Visiting Fellow with the American Enterprise Institute, specializing in national security and intelligence.As an actor, Thompson appeared in a number of movies and television shows including The Hunt for Red October, Die Hard 2, In the Line of Fire, and Cape Fear, as well as in commercials. Read more on Wikipedia

Among politicians, Fred Thompson ranks 11,154 out of 15,710. Before him are Andronikos Doukas Angelos, Ahmed al-Mirghani, Francesco Bartolozzi, Sonthi Boonyaratglin, Stephen II of Croatia, and Sargent Shriver. After him are Harihara I, Ida of Formbach-Ratelnberg, Grigory Gershuni, Boris Gryzlov, Franz Nissl, and Kurigalzu II.