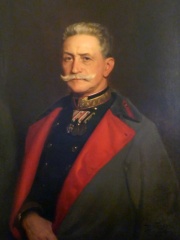 K.u.k. Feldmarschall Franz Xaver Josef Graf Conrad von Hötzendorf (since 1919 Franz Conrad; 11 November 1852 – 25 August 1925), sometimes anglicised as Hoetzendorf, was an Austrian general who played a central role in World War I. He served as Field Marshal and Chief of the General Staff of the military of the Austro-Hungarian Army and Navy from 1906 to 1917. He was in charge during the July Crisis of 1914 that caused World War I. For years he had repeatedly called for preemptive war against Serbia to rescue the multiethnic Habsburg Empire, which was, he believed, nearing disintegration. Read more on Wikipedia

Since 2007, the English Wikipedia page of Franz Conrad von Hötzendorf has received more than 275,720 page views. His biography is available in 36 different languages on Wikipedia making him the 366th most popular military personnel.