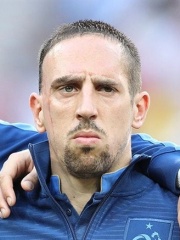 Franck Henry Pierre Ribéry (French pronunciation: ​[fʁɑ̃k ʁibeʁi]; born 7 April 1983) is a French professional footballer who plays for Serie A club Fiorentina. He primarily plays as a winger, preferably on the left side, and is known for his pace, energy, skill, and precise passing. Ribéry has been described as a player who is fast, tricky and an excellent dribbler, who has great control with the ball at his feet. Read more on Wikipedia

Since 2007, the English Wikipedia page of Franck Ribéry has received more than 4,626,396 page views. His biography is available in 75 different languages on Wikipedia making him the 147th most popular soccer player.