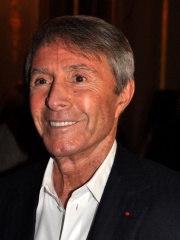 Francis Paul Veber (born 28 July 1937) is a French film director, screenwriter and producer, and playwright. He has written and directed both French and American films. Eight French-language films with which he has been involved, as either writer or director or both, have been remade as English-language Hollywood films: Le grand blond avec une chaussure noire (as The Man with One Red Shoe), L'emmerdeur (as Buddy Buddy), La Cage aux Folles (as The Birdcage), Le Jouet (as The Toy), Les Compères (as Fathers' Day), La chèvre (as Pure Luck), Les Fugitifs (as Three Fugitives), Le dîner de cons (as Dinner for Schmucks) and La Doublure (as The Valet). Read more on Wikipedia