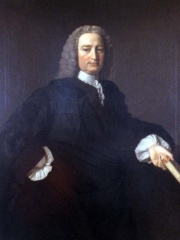 Francis Hutcheson LLD (; 8 August 1694 – 8 August 1746) was an Ulster-Scot philosopher born in Ulster to a family of Scottish Presbyterians who became known as one of the founding fathers of the Scottish Enlightenment. Read more on Wikipedia

Among people born in 1694, Francis Hutcheson ranks 4. Before him are Voltaire, François Quesnay, and Yeongjo of Joseon. After him are Charlotte Christine of Brunswick-Wolfenbüttel, Leonardo Leo, Louis-Claude Daquin, Paul of the Cross, Georg Brandt, Hermann Samuel Reimarus, Theodore of Corsica, and Philip Stanhope, 4th Earl of Chesterfield. Among people deceased in 1746, Francis Hutcheson ranks 5. Before him are Philip V of Spain, Christian VI of Denmark, Maria Teresa Rafaela of Spain, and Anna Leopoldovna. After him are Colin Maclaurin, Georg Wilhelm Steller, Domenico Alberti, Nicolas de Largillière, Moshe Chaim Luzzatto, Johann Caspar Ferdinand Fischer, and Johann Adolf II, Duke of Saxe-Weissenfels.