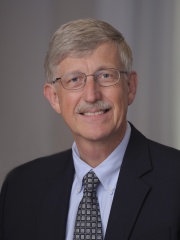 Francis Sellers Collins (born April 14, 1950) is an American physician-geneticist who discovered the genes associated with a number of diseases and led the Human Genome Project. He is director of the National Institutes of Health (NIH) in Bethesda, Maryland, United States. Before being appointed director of the NIH, Collins led the Human Genome Project and other genomics research initiatives as director of the National Human Genome Research Institute (NHGRI), one of the 27 institutes and centers at NIH. Before joining NHGRI, he earned a reputation as a gene hunter at the University of Michigan. Read more on Wikipedia

Since 2007, the English Wikipedia page of Francis Collins has received more than 854,747 page views. His biography is available in 28 different languages on Wikipedia making him the 387th most popular biologist.