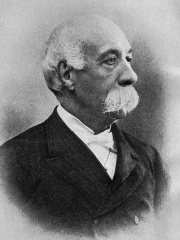 Francesco Crispi (4 October 1818 – 12 August 1901) was an Italian patriot and statesman. He was among the main protagonists of the Risorgimento, a close friend and supporter of Giuseppe Mazzini and Giuseppe Garibaldi and one of the architects of Italian unification in 1860.Crispi served as Italian Prime Minister for six years, from 1887 to 1891 and again from 1893 to 1896 and was the first Prime Minister from Southern Italy. Crispi was internationally famous and often mentioned along with world statesmen such as Bismarck, Gladstone and Salisbury.Originally an enlightened Italian patriot and democrat liberal, he went on to become a bellicose authoritarian prime minister and ally and admirer of Bismarck. Read more on Wikipedia

Among politicians, Francesco Crispi ranks 5,334 out of 15,710. Before him are Prince Friedrich Karl of Prussia, Anatoly Sobchak, Prince Philippe, Duke of Orléans, Agostino Barbarigo, Anushtegin Gharchai, and Charles II, Duke of Bourbon. After him are Sooronbay Jeenbekov, Jimena Díaz, Taksony of Hungary, Khendjer, Joan of Kent, and Luis Corvalán.