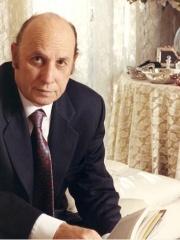 Francesco Alberoni (born 31 December 1929, in Borgonovo Val Tidone, Piacenza) is an Italian journalist and a professor of sociology. He was a board member and senior board member (chairman) of RAI, the Italian state television network, from 2002 to 2005. Alberoni was among the few regular front page writers of Corriere della Sera, Italy's most popular newspaper, which published his articles from 1973 to 2011. Read more on Wikipedia