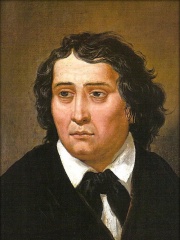 France Prešeren (pronounced [fɾanˈtsɛ pɾɛˈʃeːɾən] (listen)) (2 or 3 December 1800 – 8 February 1849) was a 19th-century Romantic Slovene poet whose poems have been translated into English, French, German, Italian, Spanish, Hungarian, Slovak, Polish, Russian, Ukrainian, Belorussian, Bengali, as well as to all the languages of former Yugoslavia, and in 2013 a complete collection of his "Poezije" (Poems) was translated into French.He has been generally acknowledged as the greatest Slovene classical poet and has inspired virtually all later Slovene literature. He wrote some high quality epic poetry, for example the first Slovene ballad and the first Slovene epic. After his death, he became the leading name of the Slovene literary canon.He tied together the motifs of his own unhappy love with that of an unhappy, subjugated homeland. Read more on Wikipedia

France Prešeren is most famous for being the national poet of Slovenia. He was born in 1800 and died in 1849.

Among WRITERS In Slovenia