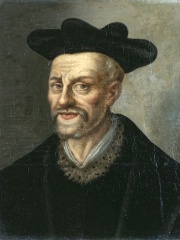 François Rabelais (UK: RAB-ə-lay, US: -⁠LAY, French: [fʁɑ̃swa ʁablɛ]; between 1483 and 1494 – 1553) was a French Renaissance writer, physician, Renaissance humanist, monk and Greek scholar. He has historically been regarded as a writer of satire, the grotesque, bawdy jokes, and songs. Because of his literary power and historical importance, Western literary critics consider him one of the great writers of world literature and among the creators of modern European writing. Read more on Wikipedia

Since 2007, the English Wikipedia page of François Rabelais has received more than 823,765 page views. His biography is available in 77 different languages on Wikipedia making him the 107th most popular writer.