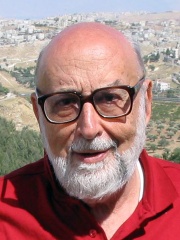 François, Baron Englert (French: [ɑ̃ɡlɛʁ]; born 6 November 1932) is a Belgian theoretical physicist and 2013 Nobel prize laureate. He is Professor emeritus at the Université libre de Bruxelles (ULB) where he is member of the Service de Physique Théorique. He is also a Sackler Professor by Special Appointment in the School of Physics and Astronomy at Tel Aviv University and a member of the Institute for Quantum Studies at Chapman University in California. He was awarded the 2010 J. J. Sakurai Prize for Theoretical Particle Physics (with Gerry Guralnik, C. R. Read more on Wikipedia

François Englert is most famous for his work on the Higgs boson particle.

Among PHYSICISTS In Belgium