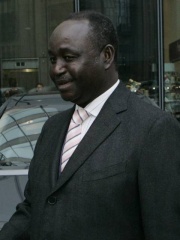 François Bozizé Yangouvonda (born 14 October 1946) is a Central African politician who was the President of the Central African Republic from 2003 to 2013. Bozizé rose to become a high-ranking army officer in the 1970s, under the rule of Jean-Bédel Bokassa. After Bokassa was ousted, Bozizé served in the government as Minister of Defense from 1979 to 1981 and as Minister of Information from 1981 to 1982. Read more on Wikipedia

Since 2007, the English Wikipedia page of François Bozizé has received more than 162,017 page views. His biography is available in 45 different languages on Wikipedia making him the 4,706th most popular politician.

Among politicians, François Bozizé ranks 4,679 out of 14,801. Before him are Andrés Nin Pérez, Karl von Habsburg, John Parricida, Emperor Kōbun, Bermudo III of León, and Pausanias of Sparta. After him are Michelle of Valois, Mobon of Goguryeo, Menander I, James I, Count of La Marche, Sviatoslav II of Kiev, and Leopold, Duke of Bavaria.