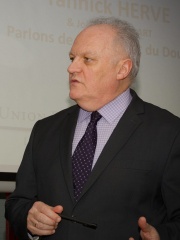 François Asselineau (French pronunciation: ​[fʁɑ̃swa asəlino], born 14 September 1957) is a French politician and an Inspector General for finances. Asselineau was a member of the Rally for France (RPF) and UMP before creating his own political party the Popular Republican Union (Union Populaire Républicaine or UPR). His movement promotes France's unilateral withdrawal from the European Union, the Eurozone and NATO. Asselineau has been described as a souverainist but doesn't self-identify as such. Read more on Wikipedia

Since 2007, the English Wikipedia page of François Asselineau has received more than 155,285 page views. His biography is available in 30 different languages on Wikipedia making him the 12,081st most popular politician.