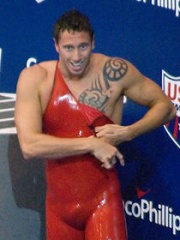 Frédérick Bousquet (French pronunciation: ​[fʁe.de.ʁik bu.skɛ], born 8 April 1981 in Perpignan) is a freestyle and butterfly swimmer from France. He was the holder of the world record in the 50 m freestyle in a time of 20.94 in long course, set on 26 April 2009 at the final of the French Championships. Since the record was swum in a banned, performance-enhancing suit it remained in limbo whether the record stood until FINA approved it in July following a modification of his suit. Read more on Wikipedia

Since 2007, the English Wikipedia page of Frédérick Bousquet has received more than 63,111 page views. His biography is available in 20 different languages on Wikipedia making him the 141st most popular swimmer.

Among SWIMMERS In France