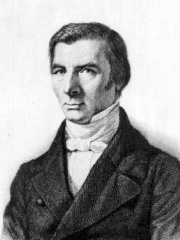 Claude-Frédéric Bastiat (; French: [klod fʁedeʁik bastja]; 30 June 1801 – 24 December 1850) was a French economist, writer and a prominent member of the French Liberal School.A member of the French National Assembly, Bastiat developed the economic concept of opportunity cost and introduced the parable of the broken window. He was described as “the most brilliant economic journalist who ever lived” by economic theorist Joseph Schumpeter.As an advocate of classical economics and the economics of Adam Smith, his views favored a free market and influenced the Austrian School. Read more on Wikipedia

Bastiat is most famous for his essay "What is Seen and What is Not Seen" which explains how the unseen costs of government intervention are often much greater than the benefits.