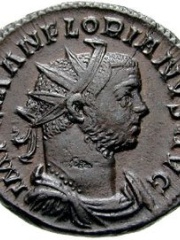 Marcus Annius Florianus (died 276), also known as Florian, was Roman emperor from the death of his half-brother, Emperor Tacitus, in July 276 until his own murder in September of that year. Florianus was the maternal half-brother of Tacitus, who was proclaimed emperor in late 275 after the unexpected death of Emperor Aurelian. After Tacitus died the following year, allegedly assassinated as a consequence of a military plot, Florianus proclaimed himself emperor, with the recognition of the Roman Senate and much of the empire. Read more on Wikipedia

Page views of Florianuses by language

Among politicians, Florianus ranks 2,485 out of 15,577. Before him are Urukagina, Ferdinand Philippe, Duke of Orléans, Bahram V, Brasidas, James II of Scotland, and Ehud. After him are Atossa, Prince Arthur, Duke of Connaught and Strathearn, Zimri, Abu Sa'id Bahadur Khan, Titus Tatius, and Ivan Gašparovič.