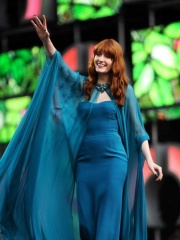 Florence Leontine Mary Welch (born 28 August 1986) is an English singer, the lead vocalist and primary songwriter of the indie rock band Florence and the Machine. Their debut studio album, Lungs, was released in 2009; on 17 January 2010, the album reached the top position on the UK Albums Chart after being on the chart for 28 consecutive weeks. Lungs won the BRIT Award for Best British Album in 2010. Read more on Wikipedia

Since 2007, the English Wikipedia page of Florence Welch has received more than 3,614,663 page views. Her biography is available in 26 different languages on Wikipedia making her the 1,906th most popular singer.

Among singers, Florence Welch ranks 1,916 out of 3,001. Before her are Jain, Eva Simons, Ashlee Simpson, Mai Charoenpura, Alma, and JoJo. After her are Mark E. Smith, James Morrison, Redman, Wendy, Agnes Carlsson, and Guildo Horn.