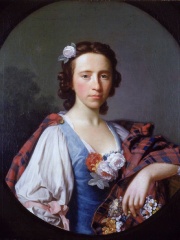 Flora MacDonald (Gaelic: Fionnghal nic Dhòmhnaill); (1722 – 5 March 1790) was a member of the Macdonalds of Sleat, who helped Charles Edward Stuart evade government troops after the Battle of Culloden in April 1746. Her family supported the government during the 1745 Rising and Flora later claimed to have assisted Charles out of sympathy for his situation. She was arrested and held in the Tower of London but released under a general amnesty in June 1747. Read more on Wikipedia

Since 2007, the English Wikipedia page of Flora MacDonald has received more than 310,902 page views. Her biography is available in 15 different languages on Wikipedia making her the 271st most popular social activist.

Among social activists, Flora MacDonald ranks 270 out of 426. Before her are Mirzo Tursunzoda, Abbie Hoffman, Donald Watson, Gunnar Sønsteby, Nimr al-Nimr, and Emmett Till. After her are Udham Singh, Toyohiko Kagawa, Kate Sheppard, Louise Bryant, Clara Barton, and Toktogul Satylganov.

Among people born in 1722, Flora MacDonald ranks 17. Before her are Prince George William of Hesse-Darmstadt, François Joseph Paul de Grasse, Paisius of Hilendar, Petrus Camper, Leopold Auenbrugger, and Jazzar Pasha. After her is John Burgoyne. Among people deceased in 1790, Flora MacDonald ranks 13. Before her are Louis IX, Landgrave of Hesse-Darmstadt, Johann Bernhard Basedow, William Cullen, András Hadik, Jacob Christian Schäffer, and Johann II Bernoulli. After her is William Livingston.