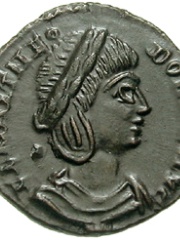 Flavia Maximiana Theodora (c. 275 – before 337) was a Roman empress, wife of Constantius Chlorus. She is often referred to as a stepdaughter of Emperor Maximian by ancient sources, leading to claims by historians Otto Seeck and Ernest Stein that she was born from an earlier marriage between Eutropia, wife of Maximian, and Afranius Hannibalianus. Read more on Wikipedia

Flavia Maximiana Theodora was the daughter of Emperor Theodosius I and Empress Aelia Flaccilla. She married Emperor Valentinian III, who was the son of her father's co-emperor, Emperor Valentinian II. Her husband was assassinated in 455 AD, and she ruled as regent for her son, Emperor Flavius Julius Nepos, until he came of age.

Among companions, Flavia Maximiana Theodora ranks 280 out of 687. Before her are Christina of Saxony, Louise of Great Britain, Pat Nixon, Mary Todd Lincoln, Joseph Ferdinand of Bavaria, and Ealhswith. After her are Constance of Castile, Statilia Messalina, Dorothea of Brandenburg, Elizabeth of Bohemia, Berengaria of Portugal, and Laura Bush.