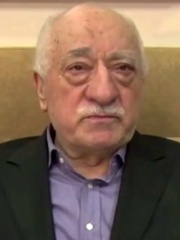 Muhammed Fethullah Gülen (born 27 April 1941) is a Turkish Islamic scholar, preacher, and a one-time opinion leader (as de facto leader of the Gülen movement: an international, faith-based civil society organization once aligned with Turkey's government, but since then outlawed as an alleged "armed terrorist group"). Gülen is designated an influential Ottomanist, Anatolian panethnicist, Islamic poet, writer, social critic, and activist–dissident developing a Nursian theological perspective that embraces democratic modernity, as a citizen of Turkey (until his denaturalization by the government in 2017) he was a local state imam from 1959 to 1981. Over the years, Gülen became a centrist political figure in Turkey prior his there being as a fugitive. Read more on Wikipedia

Fethullah Gülen is most famous for being a Turkish Muslim scholar and preacher who is the founder of the Gülen movement.

Among religious figures, Fethullah Gülen ranks 283 out of 2,272. Before him are Pope Adrian II, Abu Talib ibn Abd al-Muttalib, Pope Honorius IV, Marcion of Sinope, Pope Anacletus, and Demetrius of Thessaloniki. After him are Pope Innocent IV, Pope Boniface I, Pope Benedict II, Ephrem the Syrian, Moses in Islam, and Rebecca.