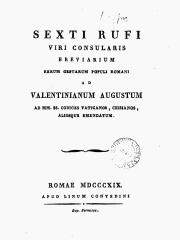 Festus (fl. 4th century), whose name also appears in the manuscripts of his work as Rufus Festus, Ruffus Festus, Sextus Festus, Sextus Rufus, and Sextus, was a Late Roman historian and proconsul of Asia whose epitome Breviarium rerum gestarum populi Romani ("Summary of the history of Rome") was commissioned by the emperor Valens in preparation for his war against Persia. It was completed about AD 370. The Breviarium covers the entire history of the Roman state from the foundation of the City until AD 364. Read more on Wikipedia

Page views of Festuses by language

Among historians, Festus ranks 169 out of 339. Before him are Roger Chartier, Shlomo Sand, Simon Dubnow, Michael Attaleiates, Peter Andreas Munch, and Arno Peters. After him are Robert Conquest, Heinrich Graetz, Bernard Desclot, Hermann Abert, Paisius of Hilendar, and Edgar Quinet.