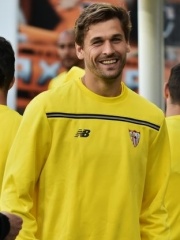 Fernando Javier Llorente Torres (Spanish pronunciation: [feɾˈnando ʎoˈɾente ˈtores]; born 26 February 1985), nicknamed El Rey León ("The Lion King" in Spanish), is a Spanish professional footballer who plays as a striker for Italian club Napoli. He started his career with Athletic Bilbao, working his way through the various youth ranks and, after making his first team debut in 2005, becoming one of the most important offensive players for the club in the following decade. He scored 29 goals in all competitions in the 2011–12 season, and was described as a "Bilbao legend". Read more on Wikipedia

Since 2007, the English Wikipedia page of Fernando Llorente has received more than 2,726,237 page views. His biography is available in 55 different languages on Wikipedia making him the 699th most popular soccer player.