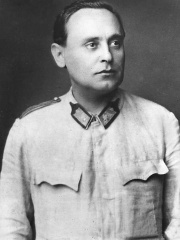 Ferenc Szálasi (Hungarian pronunciation: [ˈfɛrɛnt͡s ˈsaːlɒʃi]; 6 January 1897 – 12 March 1946) was the leader of the Arrow Cross Party – Hungarist Movement, the "Leader of the Nation" (Nemzetvezető), being both Head of State and Prime Minister of the Kingdom of Hungary's "Government of National Unity" (Nemzeti Összefogás Kormánya) for the final six months of Hungary's participation in World War II, after Germany occupied Hungary and removed Miklós Horthy by force. Read more on Wikipedia

Among politicians, Ferenc Szálasi ranks 1,484 out of 15,710. Before him are Ismail Ibn Sharif, Jiajing Emperor, Robert Ley, Mongkut, Orestes, and Gyeongjong of Joseon. After him are Kim Jong-un, Marcus Furius Camillus, Maria Amalia of Naples and Sicily, Abaqa Khan, Pauline Bonaparte, and Walter Schellenberg.