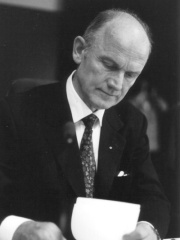 Ferdinand Karl Piëch (German pronunciation: [ˈfɛʁdinant ˈpiː.ɛç] (listen); 17 April 1937 – 25 August 2019) was an Austrian business magnate, engineer and executive who was the chairman of the executive board (Vorstandsvorsitzender) of Volkswagen Group in 1993–2002 and the chairman of the supervisory board (Aufsichtsratsvorsitzender) of Volkswagen Group in 2002–2015.A grandson of Ferdinand Porsche, Piëch started his career at Porsche, before leaving for Audi after an agreement that no member of the Porsche or Piëch families should be involved in the day-to-day operations of the Porsche company. Piëch eventually became the head of Audi, where he is credited with evolving and growing Audi into a competitor to equal Mercedes-Benz and BMW, thanks in part to innovative designs such as the Quattro and 100. In 1993, Piëch became the chairman and CEO of Volkswagen Group, which he is credited with turning into the large conglomerate it is today; He oversaw the purchase of Lamborghini and Bentley, as well as the founding of Bugatti Automobiles, all of which he integrated with the Volkswagen, Škoda, SEAT and Audi brands into a ladder-type structure similar to that used by Alfred Sloan at General Motors. Read more on Wikipedia

Among BUSINESSPEOPLE In Austria