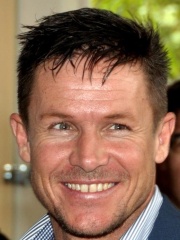 Felix Baumgartner (German: [ˈfeːlɪks ˈbaʊ̯mˌɡaʁtnɐ]; born 20 April 1969) is an Austrian skydiver, daredevil and BASE jumper. He is best known for jumping to Earth from a helium balloon from the stratosphere on 14 October 2012 and landing in New Mexico, United States as part of the Red Bull Stratos project. Doing so, he set world records for skydiving an estimated 39 km (24 mi), reaching an estimated top speed of 1,357.64 km/h (843.6 mph), or Mach 1.25. Read more on Wikipedia

Felix Baumgartner is most famous for his record-breaking free fall jump from space, which he accomplished on October 14, 2012.

Among athletes, Felix Baumgartner ranks 17 out of 3,055. Before him are Dana Zátopková, Dick Fosbury, Thomas Burke, Ray Ewry, Stanisława Walasiewicz, and Robert Shavlakadze. After him are Usain Bolt, Fanny Blankers-Koen, Hannes Kolehmainen, Iolanda Balaș, Coroebus of Elis, and Bobby Morrow.

Among ATHLETES In Austria