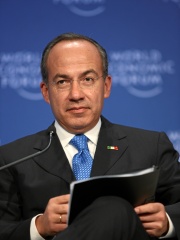 Felipe de Jesús Calderón Hinojosa (Spanish pronunciation: [feˈlipe kaldeˈɾon] (listen); born 19 August 1962) is a Mexican politician who served as the 63rd President of Mexico from 1 December 2006 to 30 November 2012 and Secretary of Energy during the presidency of Vicente Fox between 2003 and 2004. He was a member of the National Action Party (Partido Acción Nacional, PAN) for 30 years before quitting the party in November 2018. His father, Luis Calderón Vega, was one of the founders of the PAN and one of its most prominent members; Felipe joined the party in the 1980s. Read more on Wikipedia

Among politicians, Felipe Calderón ranks 5,529 out of 15,710. Before him are Empress Dowager Longyu, Hermine Reuss of Greiz, Princess Isabelle of Orléans, Hermann II, Count of Celje, Leopold I, Prince of Anhalt-Dessau, and Ichirō Hatoyama. After him are Michael I Komnenos Doukas, Emperor Go-Tsuchimikado, Simeon Uroš, Max Koegel, Chungnyeol of Goryeo, and Tushratta.