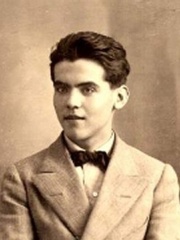 Federico del Sagrado Corazón de Jesús García Lorca (Spanish pronunciation: [feðeˈɾiko ðel saˈɣɾaðo koɾaˈθon de xeˈsuz ɣaɾˈθi.a ˈloɾka]; 5 June 1898 – 19 August 1936), known as Federico García Lorca (English: gar-SEE-ə LOR-kə), was a Spanish poet, playwright, and theatre director. García Lorca achieved international recognition as an emblematic member of the Generation of '27, a group consisting of mostly poets who introduced the tenets of European movements (such as symbolism, futurism, and surrealism) into Spanish literature. He is believed to have been killed by Nationalist forces at the beginning of the Spanish Civil War. Read more on Wikipedia

Since 2007, the English Wikipedia page of Federico García Lorca has received more than 1,806,075 page views. His biography is available in 102 different languages on Wikipedia making him the 116th most popular writer.