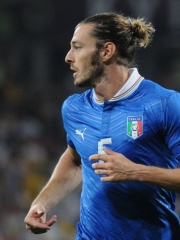 Federico Balzaretti (Italian pronunciation: [fedeˈriːko baldzaˈretti; baltsa-]; born 6 December 1981) is an Italian former professional footballer who played as a left-sided full-back. A product of the Torino youth system, his first experience as a professional footballer was on loan to Varese and Siena, returning to Turin to play a year in Serie A and two in Serie B. Later he moved to Juventus, playing a year in Serie A and the Champions League and winning the Scudetto, later revoked for the events of Calciopoli and the next season in the lower division that ended in promotion. Sold to Fiorentina in 2007, after half a season he moved to Palermo, with whom he played in the Europa League. Read more on Wikipedia