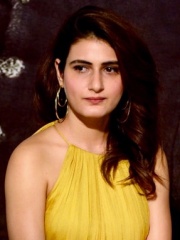 Fatima Sana Shaikh (born 11 January 1992 in Hyderabad) is an Indian film actress. She is known for her works in Hindi-language cinema, and television. Fatima appeared as a child artist in films such as Bhamane satyabhamane and One 2 Ka 4. Read more on Wikipedia

Since 2007, the English Wikipedia page of Fatima Sana Shaikh has received more than 5,417,487 page views. Her biography is available in 15 different languages on Wikipedia making her the 8,734th most popular actor.